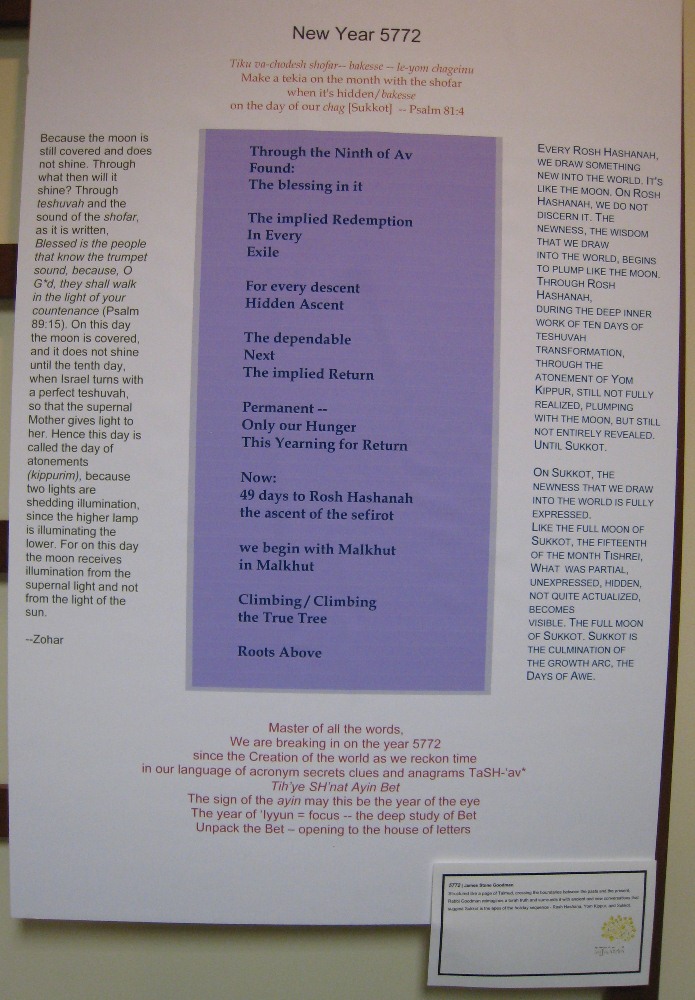 5772 | James Stone Goodman
Structured like a page of Talmud, crossing the boundaries between the pasts and the present, Rabbi Goodman reimagines a torah truth and surrounds it with ancient and new conversations that suggest Sukkot is the apex of the holiday sequence – Rosh Hashana, Yom Kippur, and Sukkot. 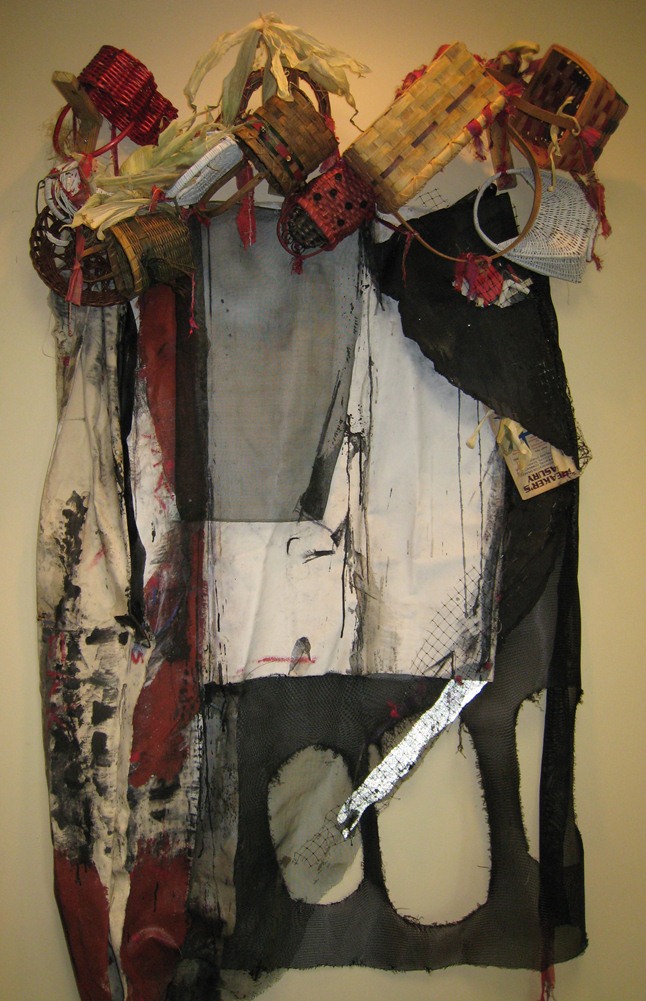 Centering my print, “GENESIS 1” in the SUKKAH ANNEX expresses story as a measure of evolving time, an aspect of life, all leading to ritual and learning. Isn’t that why we are interested in Sukkot? Most of my work is story telling, whether as abstraction, realism or comic. Sequences are connected moments or chapter in time, often drawing on a fantasy, the gestalt of observations or life. All cultures have a tale of how the earth and life began. GENESIS is one.

Clear communication is secondary to sight and touch in learning, I’m attracted to the tactile act of creating visual art as a basic communication tool. For me expressive drawing is how I register form or place, gestalt and tones are transmitted to others. My drawings lead to larger works, drawing, painting, or installation. Mark making places me in the company of the ancients , while my work speaks to my contemporaries.

My SUKKAH ANNEX WALL is a detail of “THE RED SUKKAH” a midrash on the midrash, “THE RED TENT”, by ANITA DIAMANT. Hanging “RED SUKKAH ANNEX” I remembered the original drawings, Eilat, IS, 1994. visiting and researching my Medallion family history and studying. June’s mid morning heat in Eilat sent me indoors after 12.00 p.m.I wasn’t deprived, instead the “VIEW IN MY ROOM” spoke to me. I sat cross legged on the bed as shimmering heat and light cast shadows through the typical Israeli modernist windows. The shadows ‘parceled out” spaces of tonal pulsing walls. A virtual Sukkah wall.

The photo images I took that day in Eilat became drawings, drawings went to canvases . Art of layers is a metaphor for life, a reenactment of harvest, of composting, of continuity. The SUKKAH ANNEX was built from, built on, and built for, layering as in life. My Sukkah’s boundaries are fragile, as are Israel’s, often needing reinforcement at tears. The roof for s’chach, baskets are typically women’s works world wide, containers for art, for food gathering and storage, for fishing. Baskets are proto bonnets and chin straps, bouffant hair does, helmets of war. Here, baskets could allow the stars if present
into the SUKKAH.

The SUKKAH embraces my etching “GENESIS” as an evolving story of growth toward fluidity, defying stasis in time.

Connecting through time, space, experience and memory, crossing the boundaries that define her life, Luba drew a sukkah made with woven cattails. It has a circular opening to the sky, not unlike the opening in the Roman Pantheon, and, conforming to its dome shaped structure, is a family nestled close together. Her mother, who grew up in Lithuania between the Russian border and the Baltic Sea, told her about sukkot built with cattails.

Cattails and reeds are dominant plants in the marshlands. Found along the outer edges of open water, the wetlands are frequently or continuously covered with water to the point where sunlight can no longer reach the bottom and support plant growth. Recently Luba watched a television program about the efforts to restore the Mesopotamia Marshes fed by the Tigris and Euphrates Rivers. 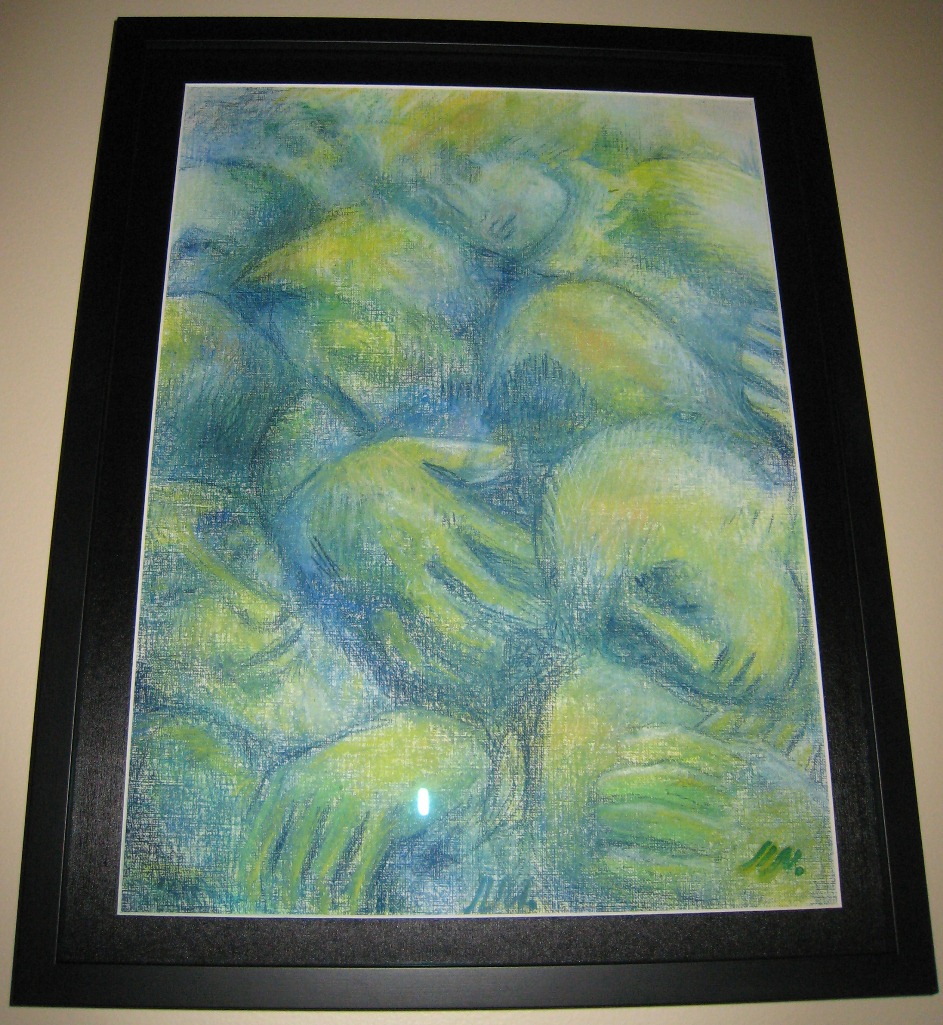 This area, claimed by some biblical scholars to be the site of the original Garden of Eden, was destroyed after the Gulf War, when Shi’ite rebels took refuge in the reed thickets and Saddam Hussein spent large amounts of money to drain the marshes and expose their hiding places. The mix of open water and marsh had nurtured an astonishing diversity of plant and animal life, and as Luba learned, 300,000 indigenous Ma’dan people who had lived there in reed houses on floating islands.

While a sukkah is traditionally viewed to be fragile and temporary, Luba’s drawing suggests a permanent sukkah, with a strong and eternal message. The family looks safe and secure, well dressed and at peace. A young person is looking up through the opening to the sky and there is conversation; however, outside the sukkah, the faces of the people are disquietingly uncomprehending. 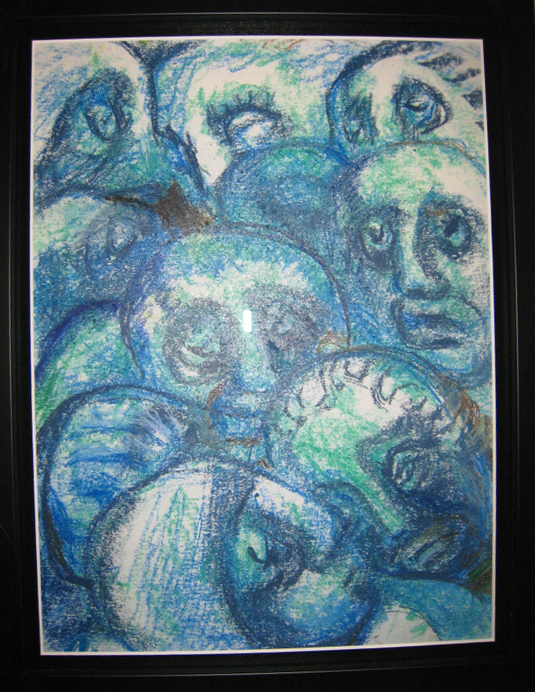 Luba wrote to me…What a meaningful idea- for a while to fence, to separate yourself and your family from habitual things of everyday life and have an opening to the Eternity. As the whole world is an endless combination of quantums- human feelings measured as an amounts of energy- being born, live forever in the Universe- add human quality to it, going from one world to another. 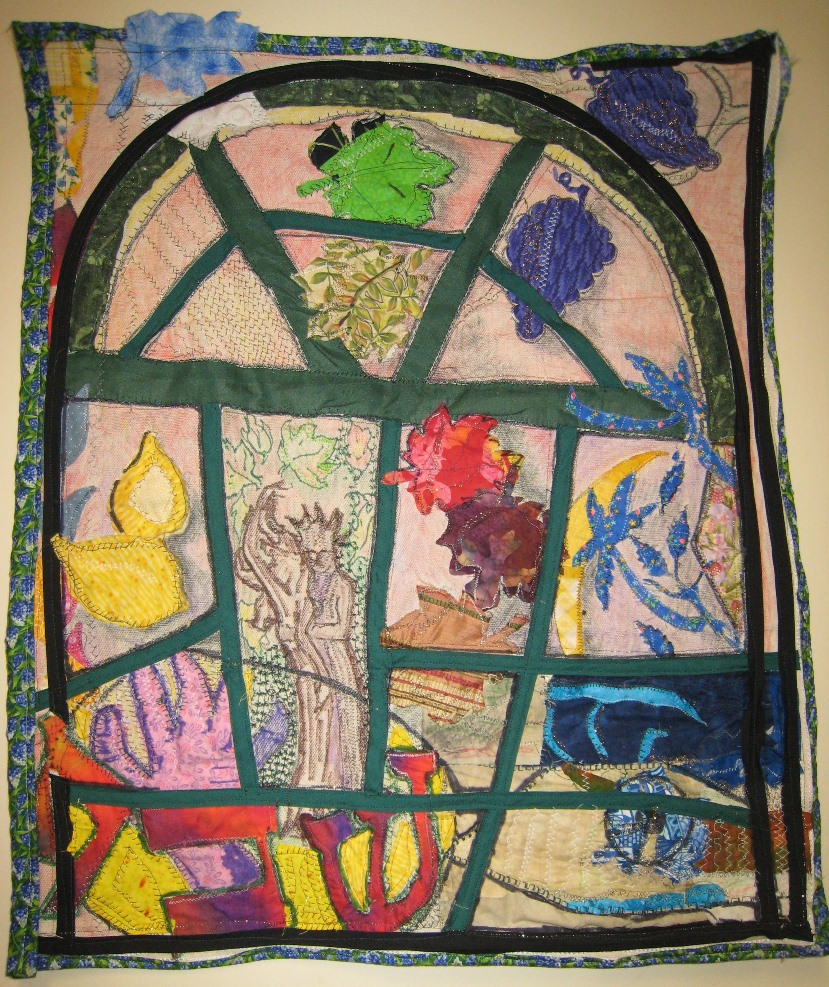 Fiber Art has merged with traditional quilting to create the new category of art quilts. I chose the mini quilt format as a way to lay out ideas and explore different techniques in quilting while jotting down ideas on breaking boundaries. The stain glass archway design suggests divisions- fragments of subject areas. Shabbat, spelled in red flame like letters breaks through time, connects with seasonal leaves. The stain glass, horizontal and vertical leans, breaks – not a clear window pane. The 1. yellow esrog forming a triptych, balances the 2. penciled red light-threaded with gold of the arch and 3. produce raining down on Israel.

The map of Israel, its eye to the world, has a pupil on Jerusalem- warding off bad, getting a glimpse in. Man’s hand with its green thumb or golden pinkie reaches up through creation where the tree and garden are man and women woven together. All the fragments are outlined in metallic thread using raw edge appliqué as a sewing technique.