Judaism imagines freedom for all people…

Judaism has a long tradition of universalism interwoven with separatism, our self-image as a “chosen people.” This dichotomy is hard to explain analytically, but is strongly felt by many who cherish our identity both as Jews and as members of humankind. “Exodus” was inspired by the Jewish commitment to freedom for all people. In it, all people, of all religions, races, ages and periods of history cross the Sea to their freedom. As we remember on Passover, we were there at the Sea, we too were slaves and crossed to our freedom.

In light of its message of freedom for all people, “Exodus” was used as the cover of Peri Smilow’s recording, “The Freedom Music Project,” which grew out of the Anti-Defamation League’s Black-Jewish Seder in Boston, and was a collaboration of Jewish freedom music and that of the civil rights movement, sung by young Jewish singers and those of Boston’s New Covenant Christian Church – a great example of our retaining our identity while advocating for universal freedom.

“Struggle and Freedom” by Ofra Goland

Struggle and Freedom and To Start To Live

I was born in Tel Aviv in 1953 and every birthday we drank l’chaim, to life. When you grow up, I was told, you will not have to go into the army because there will be peace. Peace was the dream, the fantasy that always followed me. I imagined that instead of borders, doors closed to the north, south and east, I would visit the coffee shops of neighboring countries. Only to the west, to the sea, was the door to the world open. To live in Israel was like living on an island, not one surrounded by calm waters, but one in which enemies encircle you.

I now live in a different place, a place where borders are crossed freely. The border between Holland and Belgium is barely noticeable. This is a realized possibility, but it is not the reality for the people who live in Israel.

My work is propelled by the Israeli/Palestinian conflict. I saw a picture in a newspaper of an Arab mob. Excited by hatred energy, they were burning the Israeli flag and the American flag. It was sad and terrifying. When one’s country or home is threatened, there is no security, no peace. The Flags in my artwork represent countries and on the canvas war is raging.

“To Start To Live” by Ofra Goland

There will be freedom only when peace comes. The land will lick its wounds but the loss of life will not ever be forgotten.

“I am a second-generation Jew born in 1947 working as an autonomous visual artist in Amsterdam. I had previous careers in Baroque Music and in Child Psychology. After a midlife-crisis my search for my Jewish roots began with a course in Jewish Spirituality and ended with a trip to Auschwitz. From 2005 on I studied at Gerrit Rietveld Art Academy Amsterdam, where I graduated in 2010. In my most recent artworks I use the photographs the allied forces took at the liberation of the Nazi concentration-camps in 1945. But I ‘digest’ the horror of the Holocaust into on the first sight aesthetic images.

For me as a Dutch second generation Jew, freedom means that I am on the good side of the fence, and that I can play freely with the horrible images from the past.

Illustrating a Haggadah surely is one of the wishes almost every Jewish artist has. This body of work here was created during the time of the second Intifada. The main concept of this work is to show, that the Haggadah is not just a biblical story of history, but that it also has a very strong connection to our past and the present developments. In parts, history will always repeat itself. 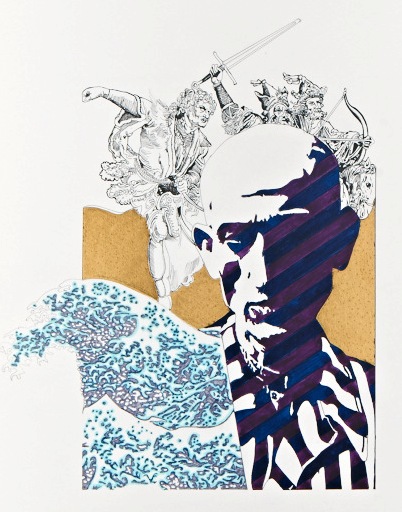 “We were slaves unto Pharaoh in Egypt” 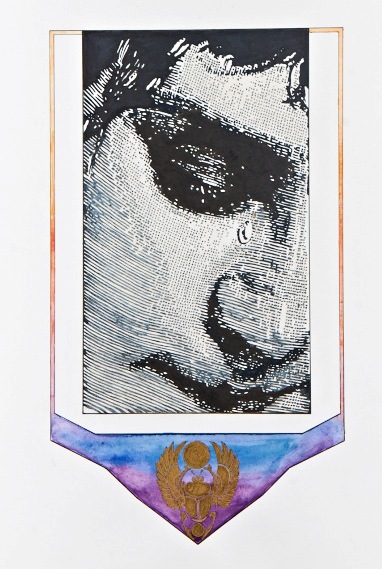 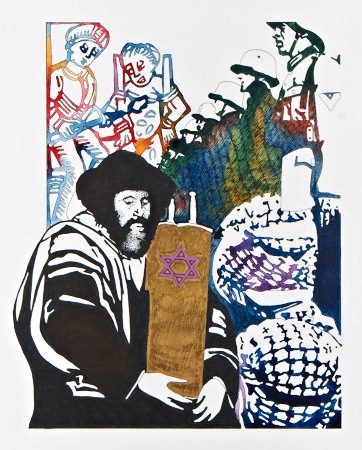 “G’d’s unfailing help has sustained our faith, for not only one enemy has risen up to destroy us, but in every generation do men rise up against us seeking to destroy us; but the Holy One, praised be G-d, delivers us from their hands.”

“Voyage Into The Matzah Interior” by Dov Lederberg

Voyage Into The Matzah Interior
Screen Shot From Video

Voyage into the Matza Interior is an extended comparison of the “round” hand-kneaded matza and the full moon. Extreme close-ups of the matza texture turn into a remarkable “lunar” and even otherworldly landscape replete with crevices and craggy mountains. The micro becomes the macro and vice versa. The modern electronic and flute track music creates a special ambiance and even has the sound effect of the artist munching noisily on a matza.

A deeper intention is implied when we reflect that we are essentially a “moon” people and almost all of our major holidays, such as Pesach and Succot, are connect with the appearance of the full moon. The moon with its cyclic fluctuations of size and light represents the feminine aspect of the Diety, the Shechina, or what is called by the Kabbalah, the Or Chozar, the Reflecting Light. This state, the realization that one is not the Source of Light, but merely its receiver, is conductive to an inherent humbleness and the creation of a proper vessel for spiritual influx. The same effect is achieved hopefully when we eat on Pesach the matza, the “humble bread”, which is completely flat and without the “yeasty” and puffed up pretensions of ego.

“What Price For Freedom” by Ben Schachter

What Price For Freedom?

What is the cost of freedom? When the Israelites were slaves, all of their work was taken from them. Their work yielded no gain. Freedom came at a great cost – the lives of the entire generation that died in the desert.