Home > The Museum > Past Events > Listening for Haman, Sounding Out the Grogger > Megillat Esther Readings 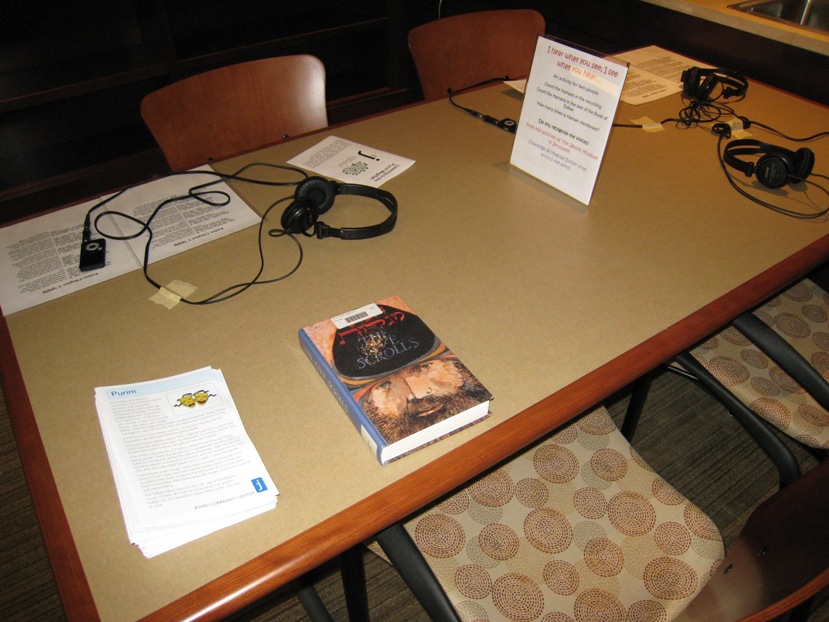 I hear what you see; I see what you hear…

Count the Hamans in the recording. How many times is Haman mentioned? Do you recognize the dialects?

From the archives of The Jewish Museum in Jerusalem:
Chantings of Megillat Esther From Around the World

Until the mid-19th century, Iranian Jewry, living in the rather hostile Shi‘a Muslim environment, was relatively isolated from the rest of the Jewish world, except for sporadic contacts with envoys from the Jewish community in Israel/Palestine. Their physical, economic and spiritual impoverishment awakened the interest of Jews in Western Europe, who established the modern schools of the Alliance Israélite Universelle in Tehran (1898) and other cities. Since the mid-19th century Iranian Jews have been exposed to manifold cultural influences and the recognition of their constitutional rights in 1906 led to their increasing access to the surrounding non-Jewish Iranian culture, including music.

On the basis of the available knowledge, the liturgical music of the Iranian Jews in the 20th century comprises three fundamental styles: recitation formulae with flowing rhythms and a narrow range of usually four notes; adaptations of non-Jewish Iranian melodies with steady beat; and Jerusalem-Sephardi melodies.

The chanting of the megila heard on this recording demonstrates recitation formulae (similar to the reading or the Torah, prose prayers, and dirges for Tish‘ah be-av. the formulae are determined by the structure of the text. They consist of repeated musical phrases comprising different numbers of motifs with fixed functions (e.g. opening, heralding of the cadence, concluding phrase). In this recording the congregation joins the chazzan to embellish to concluding formula of the verse.

Most Kurdish Jews inhabited the Iraqi ‘Kurdistan’ (Barazan, Mosul, Amadiya, Zakhu, Kirkuk) with a minority living in the Turkish and Syrian areas. According to ancient tradition these Jews are descendants of the Ten Tribes from the time of the Assyrian exile. They are first mentioned by the traveller Benjamin of Tudela (12th century CE). Solid information about the Kurdish Jews, however, dates only from the 16th century onwards. Emigration to Palestine began in the 1920s, and following the establishment of the State of Israel, almost all Kurdish Jews now live there.

The liturgical music of the Kurdish Jews, prior to their immigration into Israel betrays several archaic liturgical traits: various types of Hebrew psalmody are used, ranging from simple styles based on one or two axis pitches to more embellished ones that span over four notes (these are sometimes performed responsorially, which is perhaps a remnant of pre-Masoretic traditions); the recitation of the in a parlando (a speech-like style, with one syllable for each note); and a particular form of biblical cantillation that does not conform to either the Tiberian system, which is widespread throughout the Jewish world, or the more indigenous Babylonian.

On this recording the megila is read in the Targum (Aramaic translation of the Bible), in the dialect characteristic of the Kurdish Jews. The chazzan recites the megila in a parlando, speech like, style and embellishes with fixed melodic formulas the last two world of every verse.

Jews have lived in Italy without interruption from the days of the Maccabees until the present, through a period of 21 centuries. Although they were never subjected to general expulsion, there were frequently partial ones. They often enjoyed good relationships with the rulers and general population or were granted special privileges. They remained few in number, refrained from attracting attention, were intellectually alert, and continued faithful to their traditions. The record of Italian Jewry thus provides one of the most complex and fascinating chapters in the history of the Jewish Diaspora.

The most important element common to this tradition is the Italian pronunciation of Hebrew. Because of the nasalization of the ayin, the loss of the he, the pronunciation of the tav without accent (dagesh) as d, and especially since all the vowels (including the sheva na at the beginning and frequently at the end of a word) are fully pronounced, a peculiar sonorousness of musical expression emerged which completely Italianized the tunes, including those of German and Spanish origin. Concomitantly, the chants of Germanic origin underwent a leveling of their pentatonic (five tones scales) and characteristically wide intervals, and those of Oriental origin lost such exotic elements characteristic of eastern European Jewry.

The majority of the chants and their style of performance, as the recording here, are characterized in all Italian rites by an ecclesiastical solemnity or, at times, by operatic idioms. In the 18th–19th centuries, the singing was also influenced by the “learned” styles of Italian music or by popular songs. The ancient tradition of the Italian Jews may still be heard in Rome and in the Roman Jewish community of Jerusalem.

In the course of the 16th century, a rearrangement of the Jewish population in the lands of the Diaspora had taken place. The most important moves were the influx of exiles from Spain and Portugal into the Ottoman-ruled East and the immigration of Ashkenazim into Poland and the rest of Eastern Europe. These mainstreams of migration led to the formation of an Oriental-Sephardi and an East-Ashkenazi branch of Jewish music each developing a special character that had not previously existed.

The obstinacy shown by the Sephardim in their clinging to the Castilian vernacular and folk song did not prevent them from yielding to the powerful influence of Oriental, especially Turkish, music. This is indicated, for instance, by the increasing use of Turkish melodies for Hebrew hymns. Musical assimilation became more spectacular when the system of maqamat (Arab scales) was adopted in Jewish song. The framework of maqamat, each of which also represents a certain mood or “ethos,” was imposed on synagogue song in general and extended even beyond hymnody proper. The majestic maqam Siga became the mode for reading the Torah and all texts referring to it; the gay maqam Ajam-Nawruz was used on Shabbat Shirah, Simḥat Torah, and for weddings; the mournful maqam Ḥijāz expressed the mood of the Ninth of Av, funerals, and pericopes mentioning death.

The reader of the megila on this recording strives to give musical meaning to each sign and the community response forcefully to the name of Haman. Notice how ‘noise’ and the chazzan reading are separated, and how at times the chazzan dramatizes the reading by moving from a much embellished chanting to a parlando, speech like, style (third verse).

Djerba is an island off the coast of Tunisia. In ancient times it was an important Phoenician trading center. According to the local tradition, the Jewish settlement there is very old. It maintains that the Jews came there during the reign of Solomon and founded the present al-Ḥāra al-Kabīra (the “Big Quarter”). A family of priests fleeing Jerusalem in the year 70 C.E. is said to have transported one of the Temple gates to Djerba. It is believed to be enclosed in the Bezalel synagogue, known as al-Gharība (the “extraordinary”) of the Ḥāra al-Ṣaghīra (the “Small Quarter”), which is situated in the center of the island. The Gharība was a much frequented place of pilgrimage. The Jewish population consisted mainly of kohanim (priests) with a small sprinkling of others, although there were no levites among the residents. According to tradition, the absence of levites on the island is the result of a curse against them by Ezra because they refused to answer his request to send levites to Ereẓ Israel (Ezra 8:15), and they all died. The history of the Jews of Djerba includes three serious persecutions: in the 12th century under the Almohads ; in 1519 under the Spanish; and in 1943 under the Nazis.

Looking for music in isolation on the island of Djerba, Tunisia, during the 1920s, Robert Lachmann discovered instead that the music of Jewish communities was indistinguishable from that of the surrounding Muslim and Maghribi cultures. Two layers of music may be detected in the Maghribi liturgy: autochthonous and Eastern Sephardi. The first layer is based on the classical Andalusian musical traditions of North Africa. It is characterized by a particular quality of vocal emission, the use of the Andalusian modes and syncopated rhythmic patterns.

The musical style of the reading on the recording alludes to an adaptation of a melodic formulas of popular Arabic songs.

Precisely when Jews first began to settle in Yemen is not known, although evidence from a few historical findings shows that they had arrived there by the 4th century BCE. Today, however, only a few hundred Yemenite Jews remain in the north of the country; most of the population now lives in Israel. Although throughout their history Yemenite Jews maintained contact with the various leaders of the different Jewish centers around the world, in many respects their culture differs markedly from the other traditions. Its unique character seems to preserve some particularly ancient features, especially regarding the performance of the liturgy. Even in the modern society of Israel, where acculturation is a continuing process, the Yemenite Jews tend to live together and to form homogeneous communities, especially around their synagogues, where they go to considerable lengths to retain their distinct traditions.

The Yemenite liturgy is almost identical in its text and general form to most other Orthodox traditions, however, its unique character is revealed in three principal ways. (1) The Yemenite pronunciation of Hebrew and Aramaic texts clearly differentiates almost all the consonants and vowels; traditional pronunciations by other Jewish communities often pronounce several vowels or consonants in the same way. (2) The social and liturgical roles of the congregation and cantor are unlike those usually seen in the other Jewish traditions, with the former assuming a much broader role in its interaction with the cantor. (3) The structure of the musical items, which arises from the liturgical function of each chant, is of a different character from the other traditions, reflecting the respective roles of congregation and cantor.

The Yemenite cantillation is a unique practice and one that is probably another remnant of ancient tradition. Unlike other Jewish communities, where each of the 28 cantillation signs (tropes) for the 21 biblical books (except Psalms, Proverbs and the poetic sections of Job) has its own fixed musical motif, the Yemenites sing the texts according to eight musical motifs, which set only those words ending textual clauses. The remaining words are sung to reciting tones, the organization of which depends on the talent of the individual reader. Typically, the reading on this recording is non-measured rhythmically and displays frequent short embellished motifs, and a longer one at the end of each verse.