Micah’s work encompasses sculpture, architecture, and construction. He has taught glass at Washington University in St. Louis, and Bezalel Academy of Art and Design in Jerusalem. His sculptures have been exhibited and collected across the U.S. and in Israel. He has designed and built custom homes and completed numerous commercial construction projects. Micah holds a masters of Architecture from Columbia University and a Bachelor’s of Fine Arts in glass from Rhode Island School of Design. He is currently based in Brooklyn, New York. 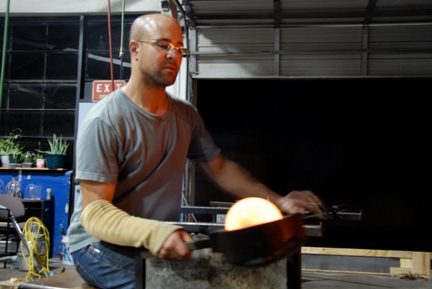 This exhibit, Listening for Haman – Sounding Out The Grogger , is inspired by an old lesson plan that is used in many Jewish communities around the world to teach children that there is danger in the world. On Purim, during the reading of Megillat Esther in synagogues and temples, children are encouraged to listen for the name of the villain Haman and then to blot out his name by making noise. Even as the atmosphere is festive, the underlying message is both frightening and empowering. The grogger is a noisemaker and its artistic renditions explored how one can respond to an enemy.

The times we were (and are) living suggested the theme for the exhibit. Sometime during the planning two things converged. First an article appeared in the NYT, November 3, 2009, about a naval battleship coming into the harbor in New York; the ship was made with 750 tons of recovered steel from the WTC. I just reacted by thinking about how this response to an enemy would resolve the problem and in what other way the steel could be used. By then I had read enough letters to newspaper editors written by Palestinians and others with the word “humiliation” in them to trigger awareness that there might be a deep hurt we have not named.

I applied for steel recovered from the WTC to make a grogger that would respond to the question: “Have you ever heard a sound that could ease an angry heart”? I asked artist Micah Roufa to make the grogger. He had to design the grogger in such a way as to incorporate the steel until it would be released from the NYNJ Port Authority. He did and the steel arrived two days or so into the exhibit.

Micah used the steel we received in two ways. A small piece of steel within a glass orb rattles and at the same time scratches the mirrored glass surface when the rebar handle, pressing deeply in one’s hand, is shaken. When not in the hand, the grogger rests upon the remains of a mangled fragment of steel angle.

In the artist’s statement, Micah saw the forms combine to create the image of a hammer crushing steel, the glass orb a reminder of the glass towers and their reflective surfaces. Micah understood the strength and fragility of glass as symbolic of the tenuous relationship we have with our constructed world. As the steel within the grogger rattles, it chips away the interior reflective coating and the glass changes from reflective to transparent, a metaphor for the clarity we gain from reflection.

In design, the grogger seemed to me to be not very different from a baby’s rattle lying in a cradle. A child makes noise, marveling at this precious discovery. An adult chips away at the barriers that keep one from seeing clearly and truthfully, discovering a possibility of peace. When I discussed this with Micah he reminded me that this auspicious “crystal ball” I was imagining would become more scratched with time and once again our ability to see the other, understand the other, would become blurred.

My obligation as recipient of the steel was to find a permanent home for the grogger made with the WTC steel. I sent a letter to Alice Greenwald, at the WTC Museum. After a long process, administered by warm and kind people (read the tone of their correspondence), the grogger was accepted for the WTC Museum’s permanent collection. It will be used for their education program. The people were so nice that I even had the chutzpah to suggest how they might proceed with this kind of a “commentary.”