It was an open invitation to talk about freedom. Freedom imagined and freedom lived. Fifty-one artists came and shared their experiences with the Passover Promise in the language and symbols of the Seder. They came from St. Louis and Chicago, New York and Pennsylvania, Massachusetts, Oregon, Arizona, Colorado and Florida…from Holland, Germany, England and Israel. Some who came were just discovering the promise, and some who came felt betrayed by the promise. Some rejoiced and some felt its burden. When we gathered in the space of the Marvin & Harlene Wool Studio Theatre, we put ourselves in the shoes of those ancient Israelites and under the direction of our tradition fulfilled the duty to tell the story of the exodus from Egypt.

In the beginning there was the inaudible whisper of G-d in Genesis 15, and its retelling in Exodus 6:6-7 through the Haggadah ritual of drinking four cups of wine:

“I will take you out from under the suffering of Egypt.
I will rescue you from their enslavement.
I will redeem you with an outstretched arm and with great judgments.
I will take you to be my people and I will be your G-d.”

It was the fifth promise in Exodus 6:8, somewhat hidden at the end of the Haggadah that drew a lot of attention.

“And I will bring you to the land which I swore to give to Abraham, Isaac and Jacob, and I will it to give you for a possession.”

Among the many discussions and conversations, the search for a safe and loving home in a just and caring country seemed to be the defining measure of the search for freedom this year. And perhaps it is no surprise…as millions of people are wandering the earth displaced because of war, famine, political unrest and poverty and searching for home.

Also, there was, it seemed to me, a call for a new kind of leadership. Strikingly, 14 artists, men and women, paid tribute to Miriam. Moses was acknowledged only once as a blue line in an abstract painting. …

"The Reach" and artist Byron Crawford

And then there was talk of the price of freedom, the costs that had been paid and the costs that will come. What are the responsibilities of being free?

For those who could not be with us, I invite you to meet the artists, to read their statements and see their works. While the exhibit was blocked to follow the narrative, “Freedom Imagined/Freedom Lived”, please feel free to let us know how you would have arranged the art. What artwork would you put next to another to generate yet another nuanced definition of freedom? I look forward to hearing from you.

Naomi Fishman
founder and curator of The Museum of Imajewnation 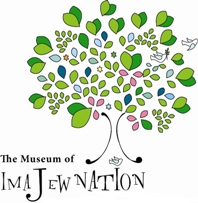